Turning Away From The Iphone Surge

...there are more reasons to turn my back on the wild hype of the iphone than I can shake a stick at, but the items at the top of the list are pretty compelling...

4) It's only a 4-gig ipod. I had a 4-gig ipod; had to give it to the elder child after her's was stolen by a young acquaintence of my younger child who has been barred - at risk of ending up in a shallow grave near some remote forest road where nobody ever goes - from ever getting within a mile of my house ever again. They cost $199, and I found that for 50 bucks less I can get an 8-gig Sandisk MP3 player that I can manage through Windows XP file manager (using drag/drop) rather than fighting with I-tunes and all of the conversion/compatibility issues. Don't need the I-pod function.

3) I have a computer - a few of them, actually - that will play DVD's. Not only that, if the day ever dawns when high-speed internet becomes something in which I can participate, I will be able to download movies from Netflix and watch them, too. More to the point, there isn't a movie in the world that I am interested in seeing on a three- to four-inch screen, regardless of the remarkable theater-formatting capability of the device.

2) I frequently call numbers on my cell phone that aren't important enough to put in my "phone book". Key pads are important to me. Insurance is important to me, too, and not just because I take cell phones places that aren't shown in the commercials. I am dealing with an issue regarding my son's insured cell phone, which went for a swim under circumstances that I suspect will never be completely revealed to me, but the bottom line is the phone is dead and trying to get a replacement is threatening to turn into a monumental hassle. The iphone doesn't have the first (and the on-screen replacement is one of the reviewer complaints) and AT&T is suggesting they won't be offering the latter.

1) The Big Deal: AT&T doesn't offer service in Central Orygun. For all of my completely valid objections to the iphone, the simple fact is that it isn't possible to get one here. If you visit here, your phone will work - piggybacking off of other providers' networks - but if you live in this recreational paradise you will have to travel four hours to Portland to set up an account so that you can get an iphone.

Don't get me wrong; the iphone looks to be a really cool piece of work, and will probably make people who let too much of the unnecessary mundanities of life crowd into their reality very happy indeed. I can't imagine trying to watch some late release movie on the thing for anything more than referential purposes, but to each his own. Can't think of a reason to buy one, though....

Just Another Day At The Office

…Momma thought I ought to be an accountant. It probably would have been an OK career move – certainly would have eliminated the need for all those science and calculus courses in college. Somehow, however, I suspect that the most gripping problem that might crop up in my workday would have been somewhat less interesting than the issue that came up this morning: 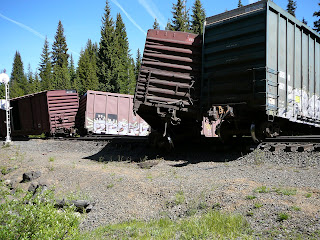 Ten cars - all empty - gave new meaning to the idea of "flying off the rails. One of the first cars back down the line that didn’t derail is a full propane car. Behind the orange excavator in this picture: that first car (behind those folks) is resting on two full propane tanks used to power the railroad switching equipment. It landed on them. There is a private campground 200 feet away…