Just Another WTF! Moment in Wonderland By The Potomac

...the quotes themselves let you know how stupid the movers and shakers of the Republik-Fascist party think you are:

Johnson has been criticized for her previous work as head of legal policy for NARAL Pro-Choice America and for criticizing the OLC's counterterrorism policies during the Bush administration.

"She may be good somewhere else, but she's not good there," said Orrin G. Hatch, R-Utah.

Republican Jeff Sessions of Alabama said that, as a former Justice Department lawyer, he's concerned about Obama packing the agency with liberals. He opposed Hill and questions the nominations of Hamilton and Johnsen.

"There is a growing frustration in the Judiciary Committee about a pattern of far-left nominees," Sessions said. "I believe the president deserves deference, but he's about used all the deference he's going to get out of me."

All of this comes from an article at CQ Politics about the irritation that the Democratic Senate leadership is experiencing as a result of this year's version of minority Republik-Fascist scorched earth political maneuvering of the sort that stood the members of that party in such good stead back during the Clinton administration as the party marched toward its triumphant but oh-so-brief ascendancy to power. While the anchor of the story is the sudden objection to the nomination of Kansas Gov. Kathleen Sebelius to the position of Secretary of Health and Human Services, the fight over Dawn Johnson's nomination to the Office of Legal Counsel demonstrates the pure, dirty street-fighting instincts that have separated Republic-Fascist Senators from their usually spineless Democratic colleagues over the last couple of decades...

The solution to this "chafing" is simple, of course, if the majority party has the stones to go down that road. The last clingy whining vestige of the Republik-Fascist Senate majority back in 2005 threatened to invoke that solution, in fact giving it the name of the Nuclear Option (thank you, Trent Lott, for that one measurable contribution to history), where a parlimentary ruling by "Big Dick" Dick Cheney would spark the mechanism that would snuff the whole idea of cloture and introduce the concept of simple majority rule to the staid, hallowed halls of the Senate side of the Congress of the United States when the subject turns to confirmation of presidential nominees. Given the fact that the Republic-Fascist party is clinging by a single Senate vote to any semblance of relevance (which, as everybody understands, informs the desperate battle Norm Coleman continues to wage in Minnesota, as opposed to the relatively short fight that Jim Tedisco waged against Democrat Scott Murphy in New York's Congressional District 20 special election to replace Kirsten Gillibrand), a renewed threat of implementation of the Nuclear Option for nominations - even those that aren't to the federal courts - might just be the way to go. Given that Republic-Fascist Senators haven't grown comfortable with the idea of being in the minority, it may be necessary to push the Nuclear Option all the way through...

There is a simple absurd lack of reality to Republic-Fascist complaints about some of the Obama nominees. Filling upper levels of the Executive Branch with people who hold views in keeping with those of the new president is a long-held tradition, and Republic-Fascist Senators didn't have any problem with that concept back in the early days of Reagan, GHW Bush, or Bush '43'. To express the idea that the forty-fourth president is somehow "stacking" the Executive Branch with fellow travelers is little more than playing to the native political illiteracy of the average FAUX News constituency. Winners get to pick their team players; loosers get to mumble their complaints. What the losers shouldn't get to do - especially when they teeter on the finely-honed edge of not mattering anymore - is dictate the team member selections of the winners. Republic-Fascist Senators didn't have any problem with all of this back in the day when they strode like giants across the land; it may be that it will require nothing less than threats to revisit the Nuclear Option to remind them - in order to make all these WTF! moments go away - that they probably would do well to not have a problem with all of this now...

...while I was making dinner tonight and listening to NPR's "All Things Considered" (a personal tradition that extends back almost as long as that program has been on the air), I heard the strangest conversation between Rep. Jane Harman (D-CA) and NPR's Robert Siegel...

What I found most strange was her continued insistence that she needs - in fact, we all need - to hear the NSA wiretap tapes to see if she actually said the things she is accused of saying. I will confess that I couldn't hope to remember the specifics of most phone calls I dealt with four years ago; I do believe, however, that I may just possibly recall the fact, if not the specifics, of whether or not I participated in a phone call four years ago that explored my participation in an effort to seek leniency for two Israeli spies in exchange for chairmanship of a Congressional committee that I would otherwise run over puppydogs and little old ladies to get my hands on...

Her Big Moment on NPR sounded, in real time, like a PR disaster of the sort that screams "Contested Seat" in 2010; subsequent review of the transcript doesn't fix that. While Rep. Harmon may not have heard of the particular concept, the fact remains that it's best not to insist on "proof" and "transcripts" of particular conversations as if you are an otherwise disinterested third party when all those "proofs" and "transcripts" would be all about YOU. "We don't know if there was a phone call" just doesn't work when you are alleged to be at one end of that phone call, and to turn this into some twisted sort of third-person discussion. That sort of declamation is - at best - simply strange and - at worst - the sort of lame dissembling that makes members of Congress look just like the mobbed-up crooks that so many of their fellow Americans think they are in the first place...
Posted by: Jack K. / 9:32 PM 0 comments

...Texas Governor Rick Perry launched his campaign for his reelection (and, perhaps, later national office) last week by coyly tea-bagging the idea of seceding from the United States. In one brilliant stroke, he demonstrated not only why he should never be allowed in the White House except as part of a scheduled tour but also why serious consideration should be given to this whole secession idea. Aside from the fact that he couldn't bring himself to categorically repudiate the idea of splitting the Union of the United States, his toying around with this newest wingnut fascination with secession raised the question: Do We Even Actually Need Texas?

Despite all of the positive cultural influences that Texas citizens have provided to this great nation of ours over the years, it may well be time, when the Governor obliquely threatens to consider the secession option, to ask the question "What Have You Done For Me Lately?" Some of the answers to that question:

George W. Bush
Karl Rove (not really a product of Texas, but his long-time Bush association pushes him across the finish line)
Alberto Gonzales
Kay Bailey Hutchison
John Cornyn
Dick Armey
Tom Delay
Phil Gramm (think sub-prime mortgages, but there's really no reason to stop there)
Ron Paul
Enron
Exxon Mobile Corp.
The Dallas Cowboys (but not, I hasten to add, the Dallas Cowboy Cheerleaders. They are a franchise all by themselves that could easily be transported anywhere in the United States, such as Central Orygun, just for one random example)

...and that's just a quickly-crafted mini-list of all those wonderful contributions that the Great State Of Texas has contributed over the last several years. Given the nature of this list, it is really hard to argue with the proposition that Texas should secede from the Union. In fact, given this sort of contribution, even ol' Abe Lincoln might find himself having serious reservations about engaging in a Civil War against a seceding state that chooses to tout someone like Tom Delay as a native son...

There have been a few cultural contributions that residents in Texas have made to the greater good of the nation over the last couple of decades, but in all honesty "Austin City Limits" could be offered by the BBC or the CBC and still get the same audience. The Austin music scene will still be the Austin music scene, regardless of the national flag flying over that scene. There may even be some other redeeming values to Texas that might argue against allowing secession, but - for the life of me - I can't think of one right at this moment, at least as long as that new nation would honor American passports. Maybe, just maybe, showing Texas the door isn't such a bad thing after all...

Why It's Important To Remember Things

...last week, the Dept. of Homeland Security released a report on threats of domestic terrorism. For reasons that probably are founded in everything from attempts to gain political advantage to the well-understood concern by various winger pundits about just how shaky the moral ground on which they are standing is, some people haven't been taking that report all too well...

Despite all of the outrage pouring out of the starboard side of the commentariat, the fact is that there are those of us who remember things. Those of us who remember things don't really give a damn about their manufactured umbrage or the dump truck loads of useless defensive words they are trying to throw up like a smoke screen to hopefully hide the view of those things we remember. So much has gone on over time that they really hope, for the sake of their commercial value as commentators as well as their own personal value as humans, that there will be enough people who don't remember so that they can keep spewing things that occasionally cross the line of what is or isn't dangerous eliminationist rhetoric while obscuring those things that we remember, just in case they are asked to explain their words after the next time...

For the bipedal jellyfish who gain their entire world view from FAUX News, it will probably work. For those of us who remember where we were fourteen years ago today when two true-blue American patriots acted on eliminationist themes, it doesn't work even one little bit. Americans acted out against other Americans, not in some single spur-of-the-moment unhinged act of violence, but in a carefully planned attack involving numerous separate steps, and they did it because a third subset of 'Americans' led them to believe that it was the "right" thing to do...

That's why it's important to remember things... 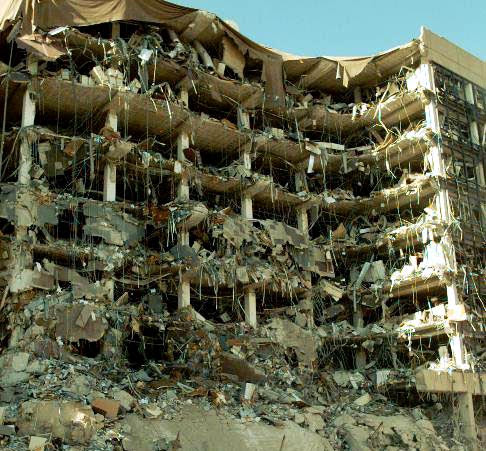