...maybe this should be done formally:

Whereas the government of the United States is exploring the revitalization of the manned exploration of space, featuring in the near term a return to the moon and later missions to asteroids and the neighborhood of Mars, and;

Whereas the the United States is in need of finding suitable candidates to staff these long-duration space flights, and;

Whereas the current economic conditions in the United States have forced former diplomats into misguided opportunities for commentary, despite the fact that they still cling desperately to their own failed neoconservative constructs of how the United States should relate to the rest of this little blue marble's residents and nonwithstanding a wealth of evidence suggesting that they understand neither the dynamics of international relationships or the impact of incessant warmongering drum-beating on the actual definable security of the United States, and;

Whereas there is a clear and compelling need to find productive employment for these former diplomats so that American citizens may be spared the disgusting prospect of seeing them offering useless and demonstrably wrong-headed commentary on the efforts of other American citizens to solve problems with words rather than laser-guided weapons, as well as the dire prospect of those American citizens being viewed as extremely expendable soldiers in some undefined war against those with whom these former diplomats so desperately want to engage in armed conflict, and;

Whereas it is fully time to move on and try something other than the practices and philosophies of the eight grim years of the previous presidential administration, so strongly advocated by these neoconservative former diplomats, that have elevated the United States of America as a political entity to a level of global mistrust and outright hatred only previously experienced by Nazi Germany and the Roman Empire;

Be it resolved that the United States should, at the earliest available opportunity, induct these former diplomats into the astronaut corps for immediate assignment to the Internional Space Station. While there, they can train for forthcoming deep-space missions where they can engage in productive research rather than wasting time and resources on the planet's surface sharing their useless thoughts about what is happening on this good earth.

Things You Don't See Every Day

...it's not all that terribly uncommon around these parts to have the random severe thunderstorm. Usually they are detected by National Weather Service Doppler radar in Pendleton (way off in northeastern Orygun) or Medford (down yonder in the southwestern part of the state). Because we have extremely poor radar coverage here in Central Orygun, sometimes that unexpected screeching radio EAS tone making you jump out of your skin comes as a result of trained storm spotters shouting to be heard about the pounding hail to NWS meteorologists about how "it seems to be a might stormy at the moment". What you don't see very often is something like this: 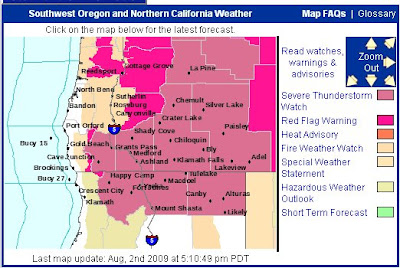 ...what's even more interesting (in a sort of "wow, those wharf rats running around in the kitchen sure are big" way) is that the vast expanse of lovely plum shade identifying a Severe Thunderstorm Watch comes to us courtesy of The NWS Storm Prediction Center in Norman, Oklahoma...you know, the tornado people...

I don't recall ever seeing a Severe Thunderstorm Watch area this large around these parts (it extends a ways to the north of the map view) and I certainly don't recall Norman, OK, ever weighing in on the subject before. So, yeh, there's something you don't see every day...