Bizarro World Visits The Rest Of Us

...after a week of pitched battles with various bits and pieces of both human and computer illnesses - the latter of which having caused me to revisit my opinions about application of the death penalty - I find myself tonight pondering the speed with which our current reality can pump its fat little legs to far outdistance just about any storyline your average fiction writer could ever hope to cook up in an otherwise fair race. The other night while cruising the intertubes during a brief interlude granted by my sinuses and a marginally effective malware scan, I found myself contemplating a couple of questions:

Question The First: How is it that the party that was in power in 2005 and stood by while New Orleans drowned decided to hold it's Southern Republican Leadership Conference in that same city in 2010?

Question The Second: How is it that this same remarkably shameless party can't come up with anything other than the same old retreaded speakers spouting the increasingly tiresome lame lies that seem tailored to do nothing more than fire up this year's version of the "base"? [sorry, religious conservatives, but you'll just have to tag along with this neo-libertarian 'base' and good luck to you with all that]

The Southern Republican Leadership Conference was truly a spectacle, featuring Newt "Family Values" Gingrich, Sarah "Half-Term Governor" Palin, and Liz "Pit Bull In Waiting" Cheney leering out at us from the TV screen screeching the sort of gibberish that reads like a parody if you are just working off of a transcript from which the speaker's name has been redactedThis is a perfect indicator in a larger sense of the sad state to which our political discourse has declined; it's not so much that people like this are saying these things because that is to be expected. It's that once again there is nothing even approaching a critical assessment of any sort of truth behind their drivel, only a flat presentation of it. Three people that one would think a party that actually respected its own oft-touted core values wouldn't allow within a country mile of a TV camera spent the end of last week standing at the dais as True Voices of the party faithful casually violating the 9th Commandment, and you'd have to dig pretty hard to find any sort of meaningful analysis of their bizarre statements...

The fact that this all went down in New Orleans, the city that Republicans as a matter of public policy turned their back on as it sank under Hurricane Katrina's rising water, only adds to the twisted fascination these broadcast screeds provided. I swear, it is going to be a long next couple of years...

...it has been a tough last several days for the Bald Eagle Stars of Odell Lake. They have been pummeled by ceaseless waves of late-season snow storms, including two that were preceded by official Winter Storm Warnings. The male disappeared for one stretch of over 30 hours, leading various watchers to fear a two-pronged version of "The Worst": his untimely demise and the abandonment of the nest - sooner rather than later - by the female. He returned finally to take up his spot in the nesting rotation, to much human rejoicing, but the celebration was cut short by a serious winter storm on Friday night that led to this: 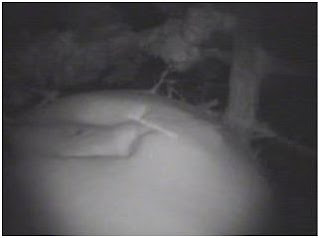 There is a large female eagle sitting in a nest in this picture
It was a serious enough storm that I awoke to 6 inches of new snow and still have a wintry landscape lurking outside my window at this moment...

...that storm eventually passed on Saturday to the point that viewers could again see eagles sitting on a nest (which I might add, is generally a viewing experience of the 'paint drying'/'grass-growing' variety). But times can be tough at the crest of the Central Orygun 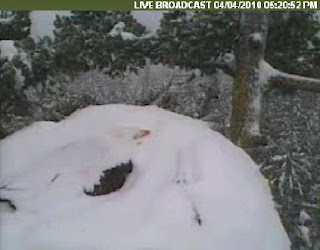 Cascades any time of the year and, if you paused for a moment to think about it, you probably would find some other better place to try to incubate a clutch of eggs in April. Eagles aren't much into contemplation, though, and if they can get through this phase to the point that their eaglets actually hatch, the summer rearing season promises warmer weather and abundant fish from nearby Odell Lake. In any case, it's not like these two birds have made some sort of singular tragic nesting choice; while various viewers fretted, panicked, and obsessed over the male's disappearance and the Friday night snow-burial of the female (I mean, seriously, at 2:00 am local time Saturday morning, nothing resembling an eagle was visible in the nest), there were at least eight other pairs of eagles around the lake going through the same storm without the benefit of infrared cameras bearing witness to their own heroic efforts. Now we are back into it again, and the weather for the next several days won't be all that much better, with periods of snow or rain forecast through Thursday...
Posted by: Jack K. / 5:25 PM 0 comments